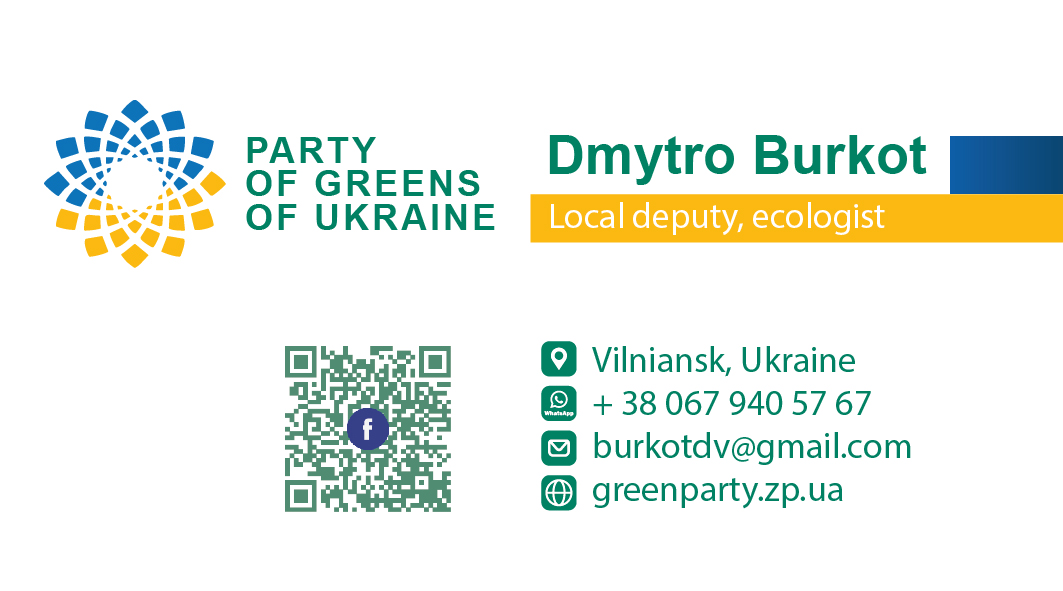 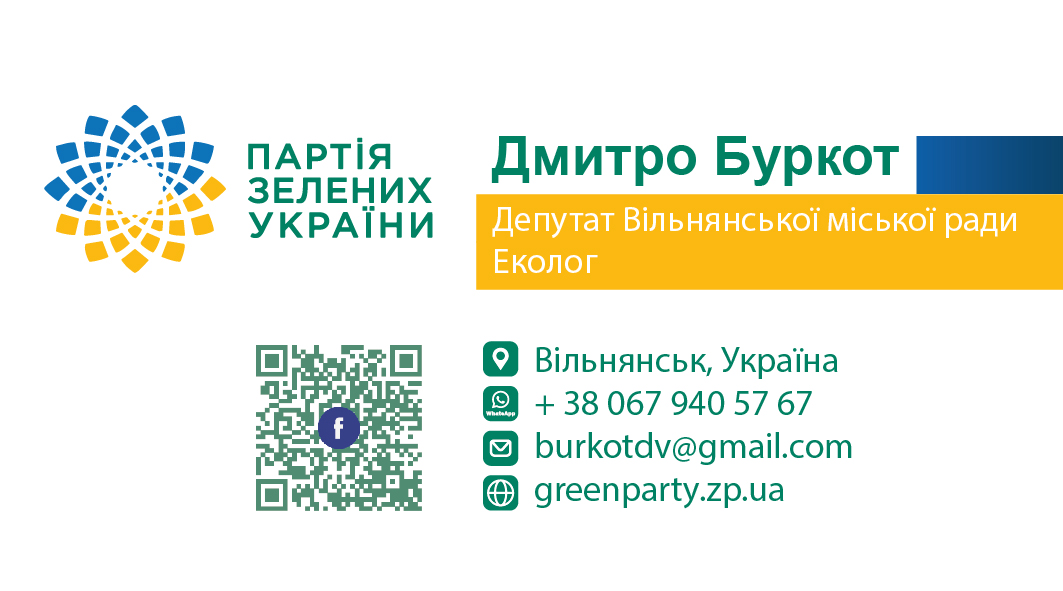 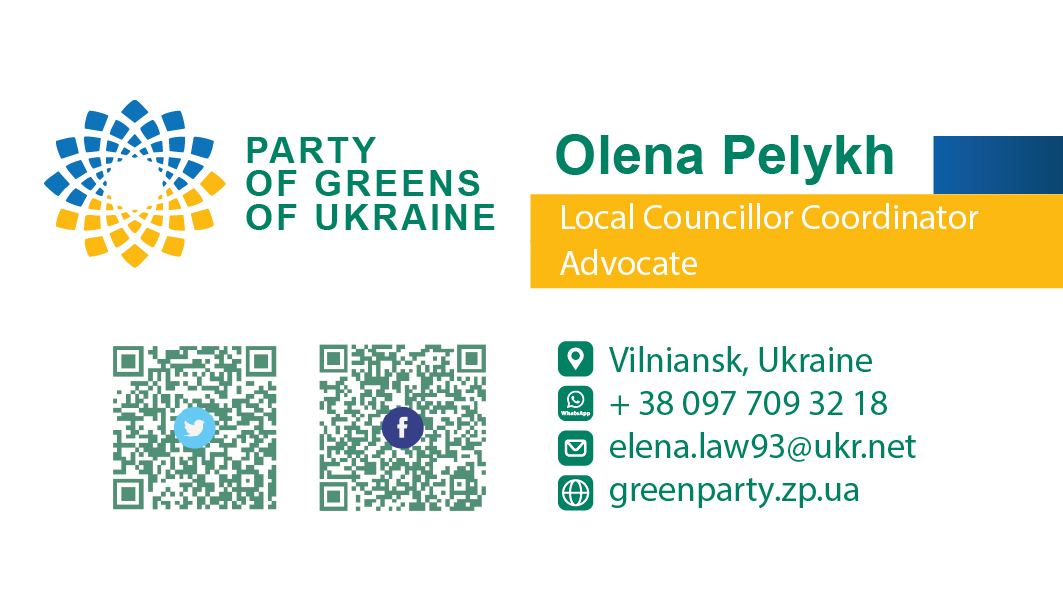 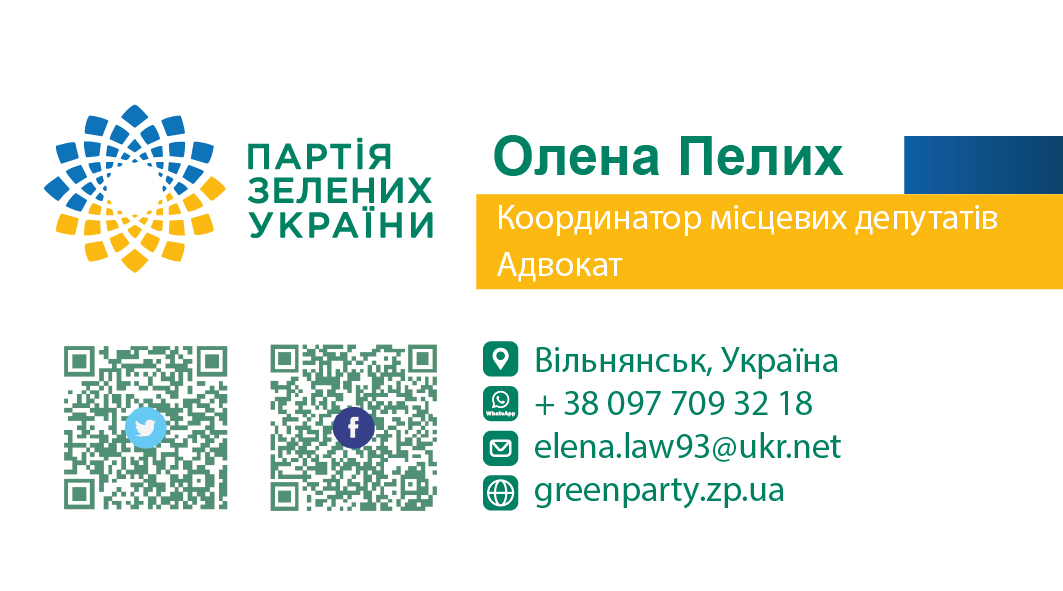 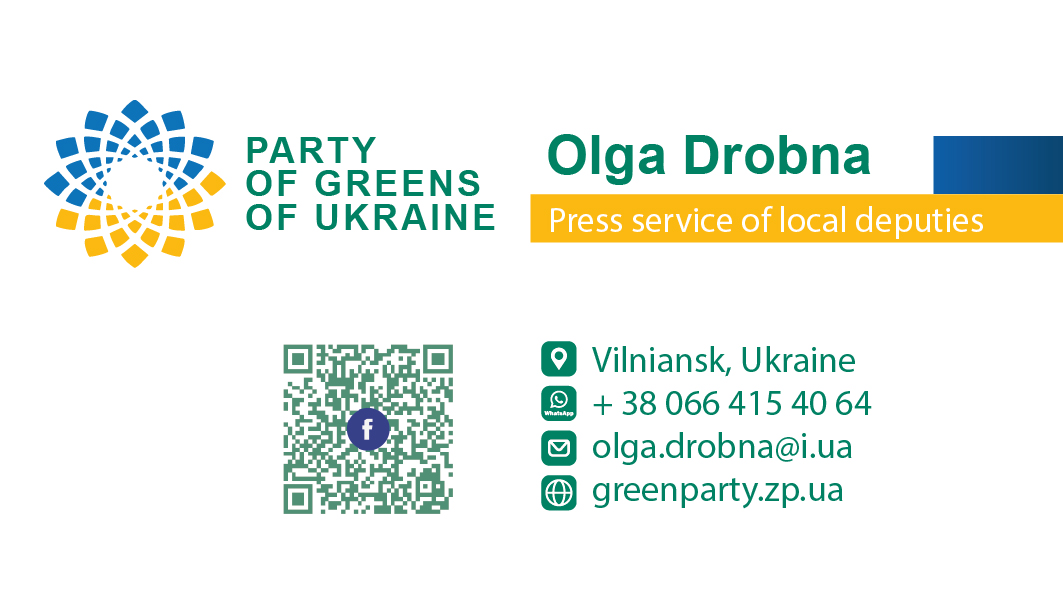 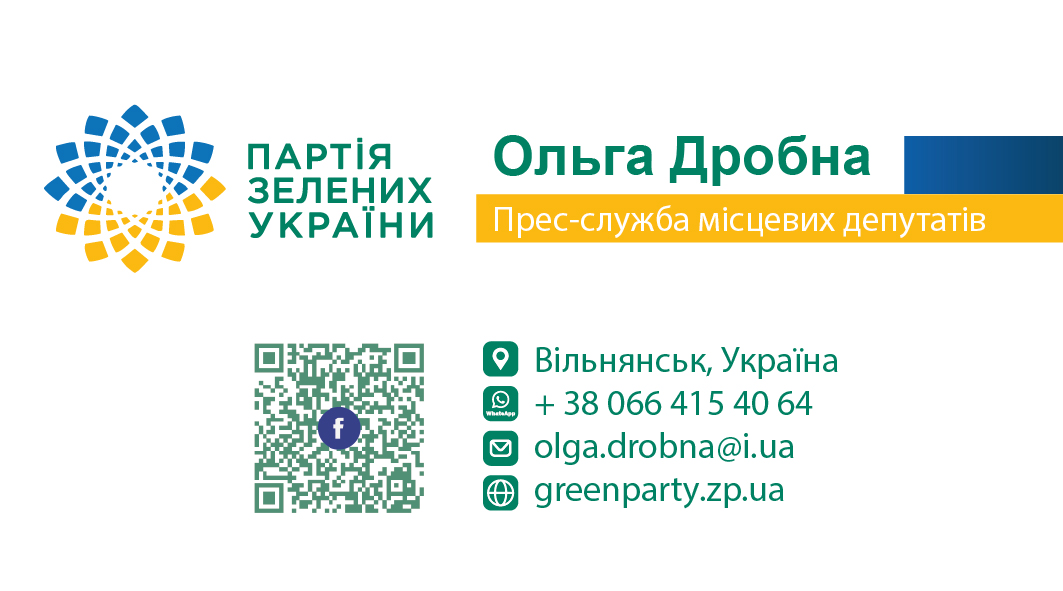 (Good morning/afternoon/evening) dear colleagues and conference participants. We are honoured to take part in such a wonderful and important event. We would like to start by extending our thanks to the organisers – the team of the European Greens and the team of Verdes Equo.Who have done such an incredible job of bringing everyone together.

We are here in order to represent a group of local deputies, who have successfully secured 26% of the seats in the city of Vil’nyans’k during the 2020 election. The city is located in South Eastern region of Ukraine, called Zaporizhzhia

Economic Component of the Zaporozhzhia Region.

Because of its rich history, fertile soil and industrial production, the Zaporizhzhia region is seen by many as the heart of Ukraine. The region derives its courage, dignity and thirst for freedom from the Zaporozhian Cossacks, who are seen by Ukrainians as modern symbol of national dignity and freedom.

The region is currently sourcing its energy from nuclear, thermal and hydroelectric plants. However, it has taken some radical steps towards developing an alternative, green energy- which comes in a form of wind turbines and solar panels. The region could be defined as a breadbasket of Europe, the agriculture sector contributes greatly towards the local budgets of the region.

Decentralization Reform in Ukraine, the Fight Against COVID-19 and the Situation of Ukrainian Municipalities.

With a help of Association Agreement, signed in 2014 between Ukraine and the European Union, the region was able to steer towards the process of decentralisation of power and reform of local self-government. The reform aims to develop municipalities and strengthen their financial and resource base. In 2020, by relying on the European Charter of Local Self-Government for guidance, new territorial communities were formed. They had their first successful elections during the Autumn of 2020.

Newly formed communities were faced with their first set of challenges – which were certainly not of an easy kind. The global pandemic of COVID-19 has hit the world, and everything stood still. The communities were not able to fully function and keep the momentum of development going to the anticipated rate. It was crucial to adjust all of the activities and allocate additional resources to combat the deadly virus. However, despite all of this, the Ukrainian municipalities, continued to work and increase their socio-economic potential.

We all had to adjust to a “new normal”, and it seemed that nothing could stop our plans. However, we were wrong. On the 24th of February, we were rudely awoken by the horrifying sounds of explosives. Nobody could believe it, surely, we are just having a bad a dream. However, it was not a dream, we were part of a “new reality” now, in which the whole country was on fire. The reality where innocent people were dying, cities destroyed, families were broken, lives were ruined. Russia set to destroy our independence and break our spirit. However, this was not a new war, this was just an escalation of what Russian has started in 2014. Annexation of Crimea was just a beginning, which spread into terrible and cynical war in Donbas. Russia has been killing Ukrainians for 8 years and now waged a full-scale war, which it labelled as a “special military operation”. Russia has failed to follow the law of war. Mercenaries, recruited by Putin, are currently torturing, kidnaping people, raping our women and brutally murdering our children. The Russian soldiers have two goals, to kill and to enrich their riches. At the time of writing this speech approximately 219 children were killed, their dreams will never come true. The footage of Bucha, Gostomel, Irpin and Mariupol, Kramatorsk and others left us mortified and speechless. Surely this can’t be happening. These cities showed us a true face of “Russian peace”. We shall remember everyone who died, the pain of loss will always be with us.

About Refugees and Humanitarian Issues.

Through its actions, Russia has caused one of the biggest refugee crises in the world. Over 5 million refugees have since left Ukraine and it is estimated that 7.7 million people had been displaced with the country. Zaporizhzhia has accepted over 117,000 refugees, most of whom were residents of Mariupol. Some of you may not know this, but Valencia is a sister/twin city of Mariupol, however, it resembles Aleppo, in Syria. It is estimated that more than 90% of the city has been destroyed. With 70% of Zaporizhzhia Region being occupied, Zaporizhzhia found itself being Russia’s next target. However, our modern Zaporozhian Cossacks are standing strong and holding back the enemy.

Small cities are struggling, for example the city of Vilniansk is normally a home to 15,000 people. However, since the start of the war it has accepted mor than 500 refugees. Local authorities are trying hard to help people, but resources are very limited. The local enterprises were forced to stop their trade due to the hostilities, as result we are now faced with a budget deficit.

My family and I have decided to stay in our hometown and we are looking forward to winning every day. My six-year-old daughter dreams of a peaceful sky, when a horrifying sound of the air raid alarm has been replaced by a sound of birds,when she does not have to hide in a bomb shelter, when she again can go to the kindergarten and resume her childhood. Even in my worst dream, I could have never imagined that our children would become “children of the war.” It is rather scary and unsettling.

Crimes Against the Environment Committed by the Russia

As representatives of the environmental party in Ukraine, we would like to draw your attention to the crimes against the environment, which are currently committed by Russia in Ukraine. War is a catastrophe not only for people but also for the environment. As a result of hostilities, air, water, soils are polluted, and flora and fauna are destroyed. There is a constant risk of chemical plants, nuclear power plants and other structures being damaged by Russia. Russia exposes Ukraine and Europe to the danger of a nuclear catastrophe every day The scale of possible damage is horrifying. The environment remains an invisible victim of war.City of Energodar is located in Zaporizhzhia. The city currently has nuclear power station that has 6 power units- making it one of the most powerful nuclear plants in Europe. The nuclear power plant was shelled by the Russian military in the first days of the war and is currently under occupation. The occupiers keep a lot of ammunition near the station, which can detonate at any time!

However, it is wrong to talk about the present without mentioning the past. We would like to say a few words about the activities of the Party of Greens in the Zaporozhzhia region and inform you about our battle for the environment. Zaporizhzhia region is one of the busiest regions of Ukraine- in terms of industrial capacity. The activity of enterprises pollutes the environment, releases harmful substances into the air and pollutes water bodies. In 2020, more than 155,000 tons of harmful substances were recorded. Today, we are developing ways to implement an automated environmental monitoring system in the region, which will allow the installation of sensors that would monitor the number of emissions produced by production pipe and their composition. Additionally, during the last five years, our team has been opposing the illegal construction of a 95-hectare kaolin quarry- which is located only two kilometres away from the city of Vilniansk. Together with the public, we have conducted several studies that found that the activities of this quarry will cause significant damage to the environment and ecosystem of the entire region. There is a high risk of radiation and water contamination. We are currently challenging the decision to build this quarry in court, I am personally providing legal support for the case. It is estimated that the number of damages caused to the environment is equivalent to 80,000 euros. However, this number will keep going up if we do not put the end to development. More information about this matter could be found in our booklet.

The End of Speech

Ukraine is a free country. Ukrainians are a free people, Throughout the history we had to fight for our independence, our right to speak and think in Ukrainian, our right to simply exist. Ukraine is striving to become part of the European Union. It is determined to have a chance to build a future with the values of united Europe. We wish to appeal to each of you and thank you for supporting us. We appeal to each of you and ask you to continue your support, because we are members of your European family! Today, every Ukrainian city seeks to build fraternal relations with European countries, on the principles of cooperation, mutual assistance and exchange of experience, to implement the idea of “Greens for Greens”. We are fighting not only for ourselves, but we are fighting for Europe. We shall never give up and shall never surrender. . Only together we can stop the war and restore peace in Europe!